Following up on my previous post, below is the chart of the temporal turning points that I have come up with. 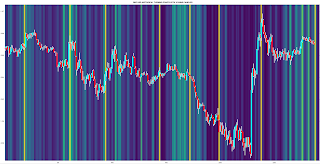 This particular example happens to be 10 minute candlesticks over the last two days of the GBP_USD forex pair.

The details I have given about various turning points over the course of my last few posts have been based on identifying the "ix" centre value of turning point clusters. However, for plotting purposes I felt that just displaying these ix values wouldn't be very illuminating. Instead, I have taken the approach of displaying a sort of distribution of turning points per cluster. I would refer readers to my temporal clustering part 3 post wherein there is a coloured histogram of the R output of the clustering algorithm used. What I have done for the heatmap background of the above chart is normalise each separate, coloured histogram by the maximum value within the cluster and then plotted these normalised cluster values using Octave's pcolor function. An extra step taken was to raise the values to the power four just to increase the contrast within and between the sequential histogram backgrounds.

Each normalised histogram has a single value of one, which is shown by the bright yellow vertical lines, one per cluster. This represents the time of day at which, within the cluster window, the greatest number of turns occured in the historical lookback period. The darker green lines show other times within the cluster at which other turns occured.

The hypothesis behind this is that there are certain times of the day when price is more likely to change direction, a turning point, than at other times. Such times are market opens, closes etc. and the above chart is a convenient visual representation of these times. The lighter the backgound, the greater the probability that such a turn will occur, based upon the historical record of such turn timings.