As part of the training of my neural net classifier it has become necessary, in order to speed up the training process, for me to have knowledge of the relative frequency of occurrences of specific dominant cycle periods. This is due to my having increased the size of my training data to almost five and a half million training/cross validation examples of my feature set. Given the amount of data now involved in training I have to subset it by period and train my neural nets on one period at a time. To decide the period training order I created a histogram of historical, dominant cycle period occurrences in all the commodity contracts/forex pairs I follow for all the data I have. The histogram is shown below. 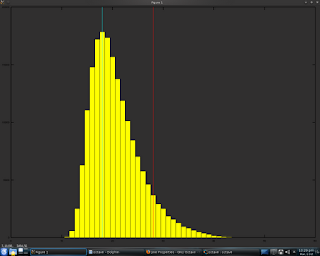 The bin range is from 10 to 50, with a maximum occurring, the cyan line, at 18. The NN training schedule will follow this order:- 18, 19, 17, 20 etc... working downwards along those bins with the remaining outstanding maximum occurrences.

Looking at this histogram I'm struck by a couple of things: although all the indicators I use are adaptive to the current measured period I'm sure many people use "classical" TA indicators with their recommended default values, for example the 14 day RSI or 20 day Bollinger Band. The above histogram shows how "hit and miss" this can be. The 20 day Bollinger Band would seem to be OK with its look back parameter approximately covering the full cyclic period of the most frequently occurring periods in the data, but the RSI? The theoretical optimum for the RSI is half a period, which at 14 is a cyclic period of 28 days, the red line in the histogram. Not so good! And what about the Commodity Channel Index (CCI)? Its creator originally recommended a one third period look back, which based on the histogram above would imply a default setting of 6 or 7. Just goes to show what value there is in some very basic statistical analysis.

How do you calculate a "dominant" cycle? I am very interested in doing something similar but on intraday data. Any info or resources would be appreciated!

Cycle period is fixed because Time doesn't change and is constant (days, weeks,months). Based on Delta time model the cycles lengths can be derived very easily.