The results of the first test are in! The test period approximately covers 2011, from 6th January 2011 to 12th January 2012 inclusive and the test was of the MTD Delta solution for the S&P 500. I chose the S&P 500 because I suppose that most readers would be interested in this market as a proxy for stock markets in general. There are 12 turning points in this solution and a screen shot is shown below. 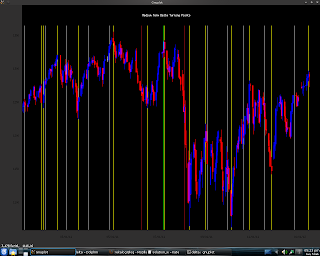 The projected solution turning points are indicated with white, red and green lines whilst the actual turns in the data are indicated in yellow. For the purposes of counting, each yellow, actual turn line is paired with one of the projected solution lines, i.e. counting from the left the first yellow line is paired with the first white solution line, the second with the second, third with third etc. The red solution lines indicate the "inversion" window with the green line between them being the number 1 point of the solution.

The first thing that stands out is that the biggest move of the year occurred within the inversion time period window, and the Delta Phenomenon book states that big moves can be expected around the number 1 point (green line), so kudos to Delta so far. Another thing that stands out is that most turning points occur within one to two weeks of their projected turning points, well within the margin of error for this solution. Kudos plus 2 for Delta. However the litmus test is this

Thanks for sharing this great content testing delta , I really enjoyed the insign you bring to the topic,