I'm not going to make a habit of posting all solutions as I complete the coding and deployment of them, but I thought readers might be interested in the Delta solution for gold (gc) shown below. 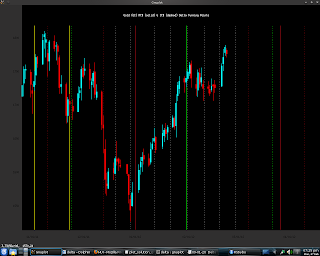 It's interesting because, according to Delta, gold is now in its inversion window on the MTD time frame, shown on the above chart as the two solid red vertical lines. By my count the first MTD red line marks a low, the green MTD a high point 1, followed by a possible in-between-point (IBP), which if it holds means higher prices are indicated for the high MTD point 2 in about 2 to 4 weeks time. However, at that time the ITD time frame will be in its inversion window too. Delta theory says that big moves can be expected around point 1 (in the inversion time window) and here we have two inversion time windows coinciding! Gold may very well experience some big move or increased volatility in the next few weeks, maybe as a result of a flight to safety from the unusual recent run-up in the S&P (see the chart in my previous post) and its impending correction. I look forward to seeing how this interpretation based on Delta pans out.
Posted by Dekalog at 19:54