This post will be the last in this series that tests the Delta Phenomenon, and acts as a summary of the previous posts. Part 1 talks about the "breakthrough" R coding that made the series of tests possible, part 2 was a general discussion about the subjectiveness of Delta, part 3 introduced the methodology of my statistical tests of Delta, with R code of the test routine, parts 4 & 5 present the results of the tests on the S&P 500 MTD solution, and part 6 the results of the ITD solution. The final results in posts 4, 5 & 6 mean that the null hypothesis of no predictive ability for Delta can be rejected, and thus the alternative hypothesis of Delta having predictive ability is accepted.

One should be cautioned, however, that statistical significance is not necessarily of practical significance, and perhaps one should ask why the Delta Phenomenon should work at all? A lot of the criticism I have read on forums etc. obviously relates to the difficulty of actually using Delta in trading. Another theme of criticism relates to the supposed "astrological" aspect of Delta and therefore some rather dismissive comments relegating Delta to the realm of crystal-ball gazing, mumbo-jumbo. I think this second form of criticism is ill-founded and rather ignorant. If you think about it, the interaction of the Sun and Earth, the phases of the moon etc. are just another way of saying "seasonality" and I think it is pretty well accepted that there is seasonality in, for example, agricultural commodity futures, oil futures etc. This seasonality may well be reflected in the share prices/indices by the linkage of large commercial interests in these areas, and various knock-on effects in trade, currency movements etc. My take on Delta is that it can be regarded as a sophisticated form of seasonal analysis, and all the normal caveats that would apply to trading seasonal tendencies should also apply to Delta.

Accepting that there could be some reasonable fundamental justification for Delta and that it has been shown to be statistically significant in terms of its accuracy as described by the methodology, how does one actually trade it? Some guidelines might be gleaned from these sample reports from a Delta timing service. Reading these sample reports shows how a knowledge of Delta can be used to draw inferences from current market action and to perhaps formulate a suitable trading strategy. Of course, analysis such as this is not a 100% mechanical approach, but it may very well add real value to the bottom line.

Given this, I have decided to deploy all the other Delta solutions I have to create Delta Charts that look like this 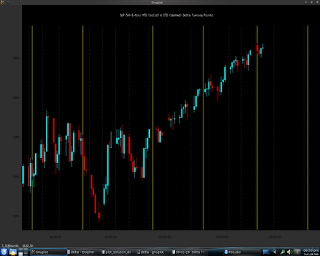 where the solid vertical lines are the MTD solution and the dashed the ITD solution. Doing this across the 30 or so commodities I regularly track will probably take me a few weeks. Once done, I will think about how to combine Delta with the other indicators I have mentioned in previous posts and test a trading system based on them. More in due course.
Posted by Dekalog at 21:53