Having now had time to run the code shown in my previous post, Temporal Clustering, part 3, in this post I want to show the results on real prices.

Firstly, I have written two functions in Octave to identify market turning points and each function takes as input an n_bar argument which determines the lookback/lookforward length along price series to determine local relative highs and lows. I ran both these for n_bar values of 1 to 15 inclusive on EUR_USD forex 10 minute bars from July 2012 upto and including last week's set of 10 minute bars. I created 3 sets of turning point data per function by averaging the function outputs over n_bar 1 - 15, 1 - 6 and 7 - 15, and also averaged the outputs over the average of the 2 functions over the same ranges. In total this gives 9 slightly different sets of turning point data.

I then ran the optimal K clustering code, shown in previous posts, over each set of data to get the "solutions" per set of data. Six of the sets had an optimal K value of 8 and a combined plot of these is shown below. 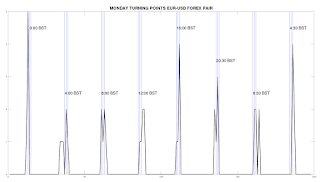 For each "solution" turning point ix (ix ranges from 1 to 198) a turning point value of 1 is added to get a sort of spike train plot through time. The ix = 1 value is 22:00 BST on Sunday and ix = 198 is 06:50 BST on Tuesday. I chose this range so that there would be a buffer at each end of the time range I am really interested in: 7:00 BST to 22:00 BST, which covers the time from the London open to the New York close. The vertical blue lines are plotted for clarity to help identify the the turns and are plotted as 3 consecutive lines 10 minutes apart. The added text shows the time of occurence of the first bar of each triplet of lines, the time being London BST. The following second plot is the same as above but with the other 3 "solutions" of K = 5, 10 and 11 added. 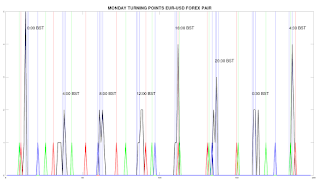 For those readers who are familiar with the Delta Phenomenon the main vertical blue lines could conceptually be thought of as MTD lines with the other lines being lower timeframe ITD lines, but on an intraday scale. However, it is important to bear in mind that this is NOT a Delta solution and therefore rules about numbering, alternating highs and lows and inversions etc. do not apply. It is more helpful to think in terms of probability and see the various spikes/lines as indicating times of the day at which there is a higher probability of price making a local high or low. The size of a move after such a high or low is not indicated, and the timings are only approximate or alternatively represent the centre of a window in which the high or low might occur.

The proof of the pudding is in the eating, however, and the following plots are yesterday's (23 November 2020) out of sample EUR_USD forex pair price action with the lines of the above "solution" overlaid. The first plot is just the K = 8 solution plot 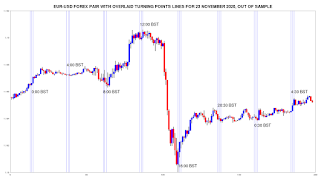 whilst this second plot has all lines shown. 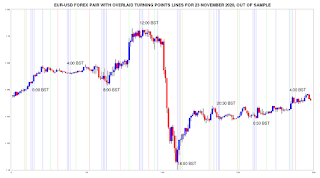 Given the above caveats about caution with regards to the lines only being probabilities, it seems uncanny how accurately the major highs and lows of the day are picked out. I only wish I had done this analysis sooner as then yesterday could have been one of my best trading days ever!