Below is an updated chart of Gold showing the next few turning points following on from where the previous chart ended. 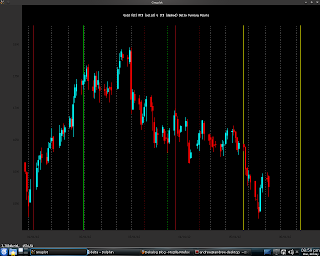 My read of this chart is that MTD 1 (solid green line) is a high which came in early March, followed by a low MTD 2 which came in a week late (the second solid red line). The market then struggled to move up to a high MTD 3, indicating a very weak market, and now the market is moving down to a low MTD 4 (the second solid yellow line). Since the most recent MTD 3 high is lower than the previous MTD 1 high and it looks like the MTD 4 low will come in lower that the MTD 2 low, I'd say that on the MTD time frame Gold is now a bear market.

On an unrelated note, it has been more than a month since my last post. During this time I have been busy working through the free, online version of Andrew Ng's Machine Learning course. More on this in a future post.
Posted by Dekalog at 22:52