Following on from my previous posts the chart below is a snapshot of the last 150 days of the S&P E-mini continuous futures contract, up to and including the 9th December. 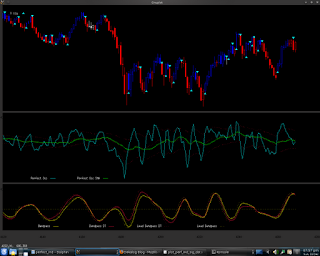 The top pane is obviously a plot of price showing triangles to indicate cyclic highs and lows when the Perfect Oscillator (middle pane) crosses its SMA (see previous post for explanation). As explained earlier the algorithm used in calculating the PO makes use of projected/predicted prices, and since these "forward prices" are available from the .oct function the bars are coloured according to the 5 and 10 day "forward prices." Based on a very simple if/or statement in the code essentially we should be long when the bars are blue and short when red. The few whites bars that are visible are bars where the conditions for being blue or red are not met.

Superimposed over the middle pane plot of the PO are the full period EMA and plus and minus 1 exponential standard deviation lines, a sort of Bollinger Bands over the indicator. The bottom plot is of the bandpass indicator which is used in the "forward prices" algorithm.

Based on the logic and theory of the PO the rules for use are essentially:-
1) go long/short according to the PO SMA crossings
2) confirm the above by the bar colours
3) exit/close up stops when the PO crosses its exponential standard deviation lines

and based on these simple rules a short entry is indicated for 12th December, particularly since the bandpass is also indicating a short trade with its leading function cross. Will be interesting to see how this indicated trade works out.
Posted by Dekalog at 20:57