It has taken some time, but I have finally been able to incorporate the Trend Vigor indicator into my Naive Bayesian classifier, but with a slight twist. Instead of being purely Bayesian, the classifier has evolved to become a hybrid Bayesian/clustering classifier. The reason for this is that the Trend Vigor indicator has no varying distribution of values but tends to return values that are so close to each other that they can be considered a single value, as mentioned in an earlier post of mine. This can be clearly seen in the short 3D visualisation animation below. The x, y and z axis each represent an input to the classifier, and about 7 seconds into the video you can see the Trend Vigor axis in the foreground with almost straight vertical lines for its "distributions" for each market type. However, it can also be seen that there are spaces in 3D where only combined values for one specific market type appear, particularly evident in the "tails" of the no retracement markets ( the outermost blue and magenta distributions in the video. )

The revised version of the classifier takes advantage of this fact. Through a series conditional statements each 3D datum point is checked to see if it falls in any of these mutually exclusive spaces and if it does, it is classified as belonging to the market type that has "ownership" of the space in which it lies. If the point cannot be classified via this simple form of clustering then it is assigned a market type through Bayesian analysis.

This Bayesian analysis has also been revised to take into account the value of the Trend Vigor indicator. Since these values have no distribution to speak of a simple linear model is used. If a point is equidistant between two Trend Vigor classifications it is assigned a 0.5 probability of belong to each, this probability rising in linear fashion to 1.0 if it falls exactly on one of the vertical lines mentioned above, with a corresponding decrease in probability assigned to the other market type classification. There is also a boundary condition applied where the probability is set to 0.0 for belonging to a particular market type.

The proof of the pudding is in the eating, and this next chart shows the classification error rate when the classifier is applied to my usual "ideal" time series.

The y axis is the percentage of ideal time series runs in which market type was mis-classified, and the x axis is the period of the cyclic component of the time series being tested. In this test I am only concerned with the results for periods greater than 10 as in real data I have never seen extracted periods less than this. As can be seen the sideways market and both the up and down with no retracement markets have zero mis-classification rates, apart from a small blip at period 12, which is within the 5% mis-classification error rate I had set as my target earlier. 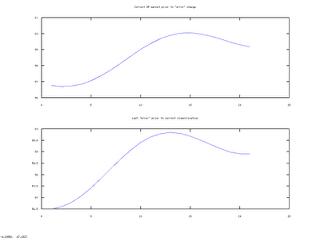 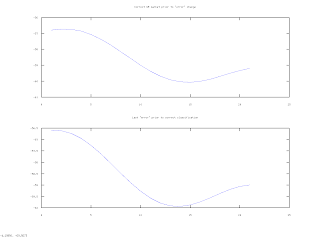 The first pane in each chart shows one complete cycle in which the whole cycle, including the most recent datum point, are correctly classified as being an up with retracement market ( upper chart ) and a down with retracement market ( lower chart. ) The second pane shows a snapshot of the cycle after it has progressed in time through its phase with the last point being the last point that is mis-classified. The "difference" between each chart's respective two panes at the right hand edge shows the portion of the time series that is mis-classified.

It can be seen that the mis-classification occurs at the end of the retracement, immediately prior to the actual turn. This behaviour could easily be exploited via a trading rule. For example, assume that the market has been classified as an up with retracement market and a retracement short trade has been taken. As the retracement proceeds our trade moves into profit but then the market classification changes to up with no retracement. Remember that the classifier (never?) mis-classifies such no retracement markets. What would one want to do in such a situation? Obviously one would want to exit the current short trade and go long, and in so doing would be exiting the short and initiating the possible long at precisely the right time; just before the market turn upwards! This mis-classification "error" could, on real data, turn out to be very serendipitous.

All in all, I think this revised, Mark 2 version of my market classifier is a marked improvement on its predecessor.