I am pleased to say that my .oct coding of the Naive Bayesian classifier is now complete. The purpose of the function is to take as inputs various measurements of the current state of the time series, and then for the classifier to classify the time series as being in one of the five following states:-
These classifications will determine the most appropriate trading approach to take given the current state of the "tradable," and two screen shots of the classifier are given below, rendered as a "paint bar" study in the upper candlestick chart. 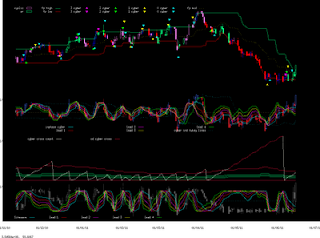 This first image just shows three classifications; trending sideways with a cycle in cyan, trending either up or down with 50% retracement in green, and trending up or down without retracement when the bars are blue or red (blue when close > open, red when close < open). Additionally, the coloured triangles show when the Cybercycle leading functions in the first subgraph cross, giving a count down to the predicted cyclic highs and lows, the blue "0" triangle being the predicted actual high or low. The green "fp high" and red "fp low" lines are the respective full period channel highs and lows of the price series, with the dotted yellow line being the midpoint of the two.

The second subgraph predicts turning points based on zero line crosses of the Cybercycle in the first subgraph. Read more about this indicator here.

The third subgraph is a plot of the sine of the phase of the Cybercycle, with leading signals, superimposed over a stochastic of the price bars. I may discuss this particular indicator in more depth in a future post.

This second screen shot is similar to the first, except that the classifications for retracement and no retracement are separated out into upward and downwards (chart key uwr = up with retracement, unr = up no retracement etc.). In this graph the coloured triangles represent the leading function crosses of the sine in the third subgraph. 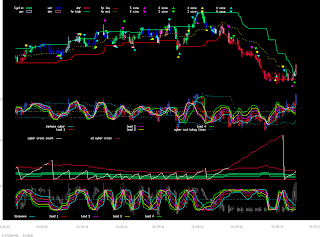 Personally I am pleased that the effort to produce this indicator (almost six weeks of Monte Carlo simulation and statistical analysis in R, plus C++ coding) has resulted in a useful addition to my stable of indicators. I think there could still be some tweaks/improvements/additions that could be added, but for the moment I will leave the indicator as it is. The next thing I have set myself to do is implement my collection of C++ .oct functions as DLLs for Metatrader 4 (maybe an EA?) on a demo account so that I can utilise/test them intraday on forex data. Hopefully this will turn out to be a relatively simple case of "dragging and dropping" the already written C++ code.
Posted by Dekalog at 00:02