I have spent the last week or so working on and refining my ideas connected with the use of the repeated median. The first thing is that the formula from the earlier post has been altered to (repeated median slope*period length)/(max-min)values of sine wave. In effect this then becomes a form of normalised momentum indicator. MC testing has been done such that I now have upper and lower limits for this at each period of interest; i.e. if the momentum across the measured period is outside of these limits, prices are highly likely to be trending and not cycling sideways. In actual application to price, the (max-min)values of sine wave in the above formula will be replaced by the absolute difference between the ucl and lcl of the cybercycle, the theoretical MC optimised limits of the extracted cyclic component of price.

An additional benefit to the repeated median slope*period length change is that I now have a form of normalised momentum indicator and the first plot above shows three applications of this to a sine wave, the three look back periods being a full cycle period (green), a half period (red) and a third period (light blue). The point of plotting this is to see how this indicator behaves in ideal cyclic circumstances to help formulate rules for use on real prices. 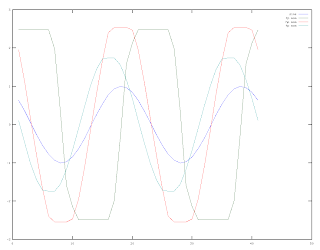 This indicator has the interesting properties listed below
The above comments seem to hold true across all periods. Knowing this "ideal" behaviour will aid interpretation of price action when the indicator is applied to price. The second chart, below, is an application of all the ideas so far discussed to an actual price series. It is the same chart as that shown previously (S&P E-mini), but updated to include recent prices. It may seem confusing to readers, so an explanation will help. 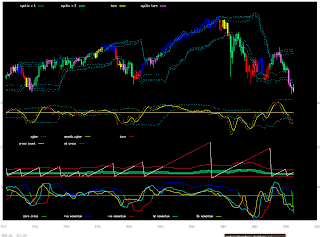 Above this there is the short term, market turn, timing chart as described in my earlier post dated 30th May. A slight addition to this is the red half period line and the fact that if the count line is above this, it is also coloured red. The interpretation of this particular chart is that red means a cyclic zero cross is "overdue" and is an indication that cyclic behaviour, if present, may be breaking down.

The third, uppermost sub plot is the yellow cybercycle and its MC optimised ucl and lcl lines. The cybercycle line is coloured red when the timing chart indicates that a market turn is due (plus and minus 2 days around the quarter period count from the most recent zero line cross).

Finally, the topmost plot is the price candlestick chart, each bar separately colour coded according to the indicators so far mentioned. Bars are green if the full period, repeated median price momentum, normalised by the absolute difference of the cybercycle ucl and lcl is within its MC optimised limits. The bars that are yellow or cyan correspond to the timing turning points, similar to the red on the cybercycle plot, the difference being that the cyan bars also meet the condition for being green bars; this is to be interpreted as a strong indication that a market turn is imminent. By default if none of the above conditions are met then bars are blue if the third period repeated median momentum is positive or red if negative. The "bands" around the candlesticks are the full period ucl and lcl for the typical price (H+L+C)/3 and the same separately for the highs and lows, which are to be interpreted as support and resistance levels when prices are determined to be cycling or moving sideways.

I think the value of the approach taken so far, and the understanding of market action that can be inferred, is evident from this plot, but a more detailed discussion of this will be the subject of my next post.
Posted by Dekalog at 22:39