Discussion of work so far 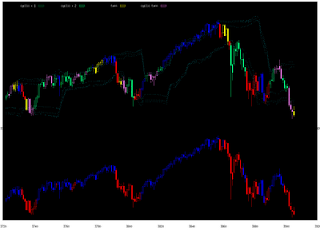 In this discussion I will be talking about the indicators etc. that have been developed so far and the reader is referred to all previous posts and especially the candlestick chart in the post dated 3rd July and the version thereof above. The topmost plot above is the same as the topmost in the previous post, whilst the lower plot is a plot of the default coloured bars only (see post dated 3rd July).

Looking at the extreme left of this candlestick chart we can see that a cybercycle zero line cross has just occurred (@ x-axis 3720) and at x-3724 the candles change colour to cyan, meaning that the turn indicator shows a possible turn in 2 days time. A few days later, candles turn yellow, meaning that prices are still in the "turn window" but no longer satisfy the conditions for being a sideways market according the formula for momentum/abs(ucl-lcl) of cybercycle. At this time, the momentum indicators are following the pattern that can be expected for a cyclic top to be in place. All in all, I would characterise this as a high probability short set up and subsequent price action confirms this to be a good call as prices decrease to the price lcl levels (@ x-3738).

At these new lower levels (@ x-3738) we now see a new set up to go long. Again prices are indicated to be in a "turn window" and the momentum indicators are following the pattern that can be expected for a cyclic low to be in place. Again this turns out to have been a good call as prices subsequently increase to the price ucl levels (@ x-3747).

As prices reach these new high levels (@ x-3747) there is again a change to cyan bars indicating another cyclic turn is imminent, this being confirmed by the momentum indicators patterns. However, subsequent price action obviously fails the assumed cyclic model as prices move into a narrow sideways channel with both the cybercycle amplitude decreasing and the cybercycle flip-flopping around the zero line. Also the expected cyclic pattern of the momentum indicators breaks down with all three period lines converging to, or flip-flopping around the zero line. There is an interesting series of posts on Brett Steenbarger's blog about approaching trading in a scientific manner, with a trading hypothesis being either confirmed (profitable trade) or being disconfirmed (unprofitable trade) and thus providing new market insight. Taking this approach, the failure of the turn indicated at x-3747 (and possible trading loss) provides new market insight i.e. trying to trade cyclic market turns isn't going to be profitable, even though the prices are indicated by the predominantly green and cyan bars to be moving sideways. If the market is trading sideways but it isn't profitable to pick highs and lows to take advantage of mean reversion, may be it will be more profitable to trade breakouts of the sideways channel?

So, the question now is how to trade the breakout, and in which direction? The momentum indicators perhaps give a clue. All the default colour bars, apart from 4, are blue, indicating upwards momentum. Also, the full period momentum never goes negative throughout this sideways channel. I would take this as a strong indication to look for an upwards breakout, which in fact occurs at (@ x-3774). The market then runs upwards for approx. 2 weeks. During this time period trailing a stop would seem to be the most appropriate approach as there are no cyclic or sideways market indications i.e. no green or cyan coloured bars.

This 2 week upward run ends at x-3792 with a sharp red down bar. If not already stopped out, and in the absence of either green or cyan bars, and with all three period momentum lines indicating either falling or negative momentum, this would appear to be a straight forward, go with the flow, short signal. If taken, short profits accrue quite quickly until the third cyan bar (@ x-3798) when there is a bullish engulfing bar followed by a short retracement of the down move. The indicated "turn window" immediately prior to this short retracement might indicate a new long position is in order, or perhaps only take short profits. However, militating against this action is the fact that both prices and the cybercycle have penetrated below their respective lcl levels. It is difficult to say whether, in reality, either action would have been taken if a short position had been established. However, it is easy to say that the hypothesis of a cycling market is quickly disconfirmed by the sharp downward bar at x-3802, which closes below the low of a possibly perceived, cyan bar, cyclic low, and which is immediately followed by a "hammer" candlestick pattern and then 4 red bars. Whether the 4 red bars would indicate a new short would be debatable as 2 of the momentum indicators at this point show bullish divergence.

After these 4 red bars we get 3 blue bars, which following bullish divergence and a hammer signal would indicate a new long is in order. Additionally the full period momentum indicator is flattening out, which would indicate possible high momentum to the upside if the bars were actually green and hence possibly cycling. If taken, this long moves into profit until we get green and cyan bars at the price ucl level at (@ x-3815), which of course indicates that a possible cyclic top is imminent. However, this hypothesis of cycling behaviour again is quickly disconfirmed by prices moving higher, the presence of another hammer, the momentum indicators not following the "expected" pattern for a cyclic top and finally the bars turning blue for a nice set up for the long up trend to the red bar (@ x-3858).

Of course, the period starting with the red bar (@ x-3858) is very interesting as it incorporates the record breaking, huge, intra day move and subsequent large oscillatory swings and increased volatility. Given these unique conditions I think it would be too much to expect any systematic approach to behave "normally," and equally I think it would be unproductive to try to adjust the system parameters to cope with such conditions as this would be gross over fitting of system parameters. However, having said that, how might the current implementation the "Dekalog" system have coped?

Well, the fact that there is a red bar 8 days before the meltdown means that any open trades would probably have been short trades, hence benefiting from the big move. In fact the day of the big move is the first green bar for approx. 40 trading days, and hence no cyclic action inspired trades would have been open on the day of this move. Given that no "cyclic" trades would have been open, the default trade direction of short (red bars) was in place for 4 consecutive days before the big move to the downside. After the big move the bars are green for 9 more days before turning red again, indicating possible sideways/cyclic market conditions. Would cyclic trades have been placed during this period? Well, who knows? The "Dekalog" system rules have not been tested enough and are not yet refined enough to say for sure what cyclic positions if any, would have been taken. Certainly, after such a big move in one's favour it might have been psychologically difficult to take a contrary position. Also, during the first part of this 9 day period both prices and the cybercycle were below their respective lcl levels, suggesting that it might not be time to try to trade any cycles.

After this 9 day, possibly cycle period, there is again a period of default bar colours, but with obviously higher volatility than normal. If trading had occurred during this period a couple of whipsaw losses might have been realised. However, at bar (@ x-3890) the bars turn green again for a probable small, long side profit, quickly followed by an almost perfectly indicated cyclic high which results in a nice profitable short trade down to and through the price lcl level. The last, yellow bar is the daily price bar for 2nd July.

All of the above should be read in the spirit of "me thinking out aloud" about how the Dekalog approach should be applied, and does not represent hard and fast, tested system rules. The testing and systematic application of these concepts to different price series will be the focus of immediate future work, and in this regard some ideas that come to mind are listed below.