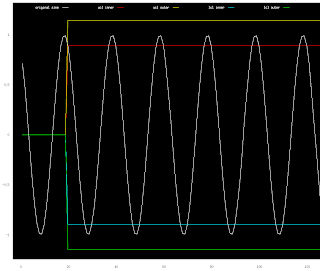 Writing the function was a relatively simple matter of reusing some of the code that had already been written to perform the tests detailed so far. A graphical plot of the appearance of the indicator is shown above.

To reiterate so far, the indicator:
The next step will be to write a Monte Carlo routine to test whether this indicator performs as expected on a new "out of sample" set of randomised sine waves, and this will be the subject of the next post.
Posted by Dekalog at 23:59