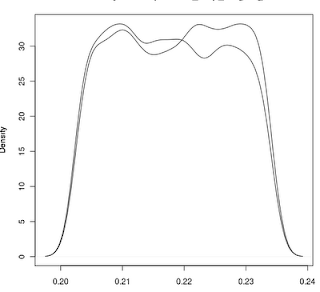 Following on from the previous blog post, further investigation of the Kolmogorov-Smirnov test failures for periods 16, 24, 32, 40 and 48 density plots, for both amplitude 1 and variable amplitude, show that in each case the distributions "collapse to a unique value" and essentially there is no variation as the max and min values in each distribution are the same, 0.2071068. This is of no concern regarding the result of the Kolmogorov-Smirnov test, it just means for these periods there will not be two separate multipliers for the ucl and lcl: in effect there will just be a line of support/resistance instead of a zone, although I have an idea to address this which will be outlined later.

For Kolmogorov-Smirnov test failures for periods 27, 38, 45 and 49 refer to the density plot above, which is similar for all four period failures. It can be seen that the tails are almost identical and that the "plateau" area shows some variation: I surmise that it is this variation in the plateau that leads to the rejection of the null hypothesis. However, for the purposes of setting the ucl and lcl multipliers it is the tails that are of interest, and since the tails so similar to each other these test failures are also of no consequence.

The conclusion to be drawn from these tests is that
The actual determination of these multipliers for each period will be the subject of the next post.
Posted by Dekalog at 19:55