An Improved Currency Strength Indicator plus Gold and Silver Indices?

In the past I have blogged about creating a currency strength indicator ( e.g. here, here and here ) and this post talks about a new twist on this idea.

The motivation for this came about from looking at chart plots such as this, 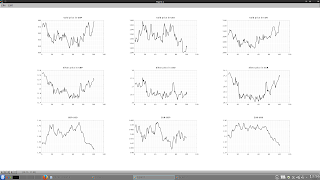 which shows Gold prices in the first row, Silver in the second and a selection of forex cross rates in the third and final row. The charts are on a daily time scale and show prices since the beginning of 2018 up to and including 25th May, data from Oanda.

If one looks at the price of gold and asks oneself if the price is moving up or down, the answer will depend on which gold price currency denomination chart one looks at. In the latter part of the charts ( from about time ix 70 onwards ) the gold price goes up in pounds Sterling and Euro and down in US dollars. Obviously, by looking at the relevant exchange rates in the third row, a large part of this gold price movement is due to changes in the strength of the underlying currencies. Therefore, the problem to be addressed is that movements in the price of gold are confounded with movements in the price of the currencies, and it would be ideal if the gold price movement could be separated out from the currency movements, which would then allow for the currency strengths to also be determined.

One approach I have been toying with is to postulate a simple, geometric change model whereby the price of gold is multiplied by a constant, let's call it x_g, for example x_g = 1.01 represents a 1% increase in the "intrinsic" value of gold, and then adjust the obtained value of this multiplication to take in to account the change in the value of the currency. The code box below expresses this idea, in somewhat clunky Octave code.
For this snippet, current_data is a 2-dimensional vector containing yesterday's and today's gold prices in GBP and USD, plus yesterday's and today's GBP_USD exchange rates.

The above would be repeated for all gold price currency denominations and the relevant forex pairs and be part of a function, for x_g, which is to be minimised by the Octave fminunc function. Observant readers might note that the error to be minimised is the square of the log of the accuracy ratio. Interested readers are referred to the paper A Better Measure of Relative Prediction Accuracy for Model Selection and Model Estimation for an explanation of this and why it is a suitable error metric for a geometric model.

The chart below is a repeat of the one above, with the addition of a gold index, a silver index and currency strengths indices calculated from a preliminary subset of all gold price currency denominations using the above methodology. 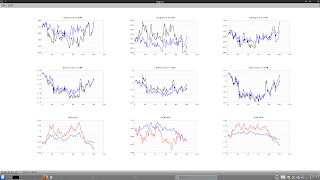 In the first two rows, the blue lines are the calculated gold and silver indices, all normalised to start at the first price at the far left of each respective currency denomination. The silver index was calculated using the relationship between the gold x_g value and the xau xag ratio. Readers will see that these indices are similarly invariant to the currency in which they are expressed ( the geometric bar to bar changes in the indices are identical ) but each is highly correlated to its underlying currency. They could be calculated from an arbitrary index starting point, such as 100, and therefore can be considered to be an index of the changes in the intrinsic value of gold.

When it comes to currency strengths most indicators I have come across are variations of a single theme, namely: averages of all the changes for a given set of forex pairs, whether these changes be expressed as logs, percentages, values or whatever. Now that we have an absolute, intrinsic value gold index, it is a simple matter to parse out the change in the currency from the change in the gold price in this currency.

The third row of the second chart above shows these currency strengths for the two base currencies plotted - GBP and EUR - again normalised to the first charted price on the left. Although in this chart only observable for the Euro, it can be seen that the index again is invariant, similar to gold and silver above. Perhaps more interestingly, the red line is a cumulative product of the ratio of base currency index change to the term currency index change, normalised as described above. It can be seen that the red line almost exactly overwrites the underlying black line, which is the actual cross rate plot. This red line is plotted as a sanity check and it is gratifying to see such an accurate overwrite.

I think this idea shows great promise and for the nearest future I shall be working to extend it beyond the preliminary data set used above. More in due course.
Posted by Dekalog at 16:35