Having successfully integrated the FANN library I've changed my mind as to the design of my neural net classifier. Previously I had planned to train a series of classifiers, each "tuned" to a specific measured period in the data, and each to discriminate between 5 distinct market types - my normal cyclic, uwr, unr, dwr and dnr as I've talked about in earlier posts.

Now, however, I'm working on a revised design that incorporates elements of a decision tree, where neural nets sit at interior nodes of the tree. A simple schematic is shown below 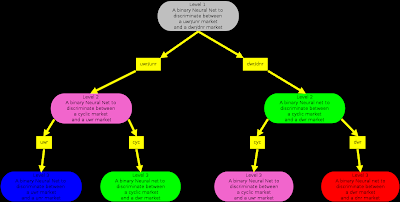 The advantage of this model is that I only have to train 5 neural nets, represented by the 5 colours in the above schematic, and each net is a binary classifier (-1 and 1) with only one node in its output layer, with a decision rule of > 0 or < 0 for the activation function. Rather than have one neural net per period, the period is now one of the features in the features input vector.

One slight change to this Octave code will be to use the Hyberbolic tangent as the activation function (see Y. LeCun 1998, available as paper 86 here). I may also try to implement some other tricks recommended in this paper.
Posted by Dekalog at 23:24