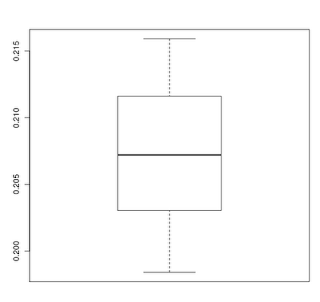 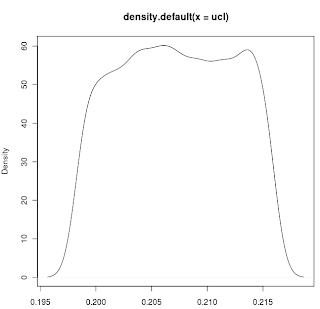 The second graph is plot(density(ucl)), a plot of the kernal density. Note the steep drop offs at about 2.00 and 2.15. This is a pattern that repeats for almost all periods for both the ucl and lcl, although of course with different values at the drop off points. This second graph suggests that in fact two multipliers could be used to create a "zone" ucl and lcl. It can be conjectured that
However, before this particular idea is investigated further there is one more run of the MC routine I would like to do. The above results come from a run where the sine wave amplitude is one. Of course real prices, if they are in a sideways channel, won't be oscillating with this amplitude but will have variable amplitudes. Therefore the MC routine shall be run again with sine waves of various amplitudes, and the results compared with those obtained so far.
Posted by Dekalog at 23:39